Of
Digital Tunisia
| 35 seconds ago

The eminent professor Gérard Mourou, of the Polytechnic of Paris, Nobel Prize in Physics 2018, gave a lecture at the National Institute of Applied Sciences and Technology (INSAT) in the large auditorium, Wednesday 2 November 2022, in the presence of 600 scientists and students, entitled “Possibilities linked to fundamental issues around science, medicine and the environment”.

Gérard Albert Mourou is a French physicist who invested in the field of electric fields and lasers. He is the co-inventor of a frequency shift amplification technique that was used to create ultra-short, ultra-high-power pulses in pulsed lasers. For this invention he received, together with his doctoral student Donna Strickland, the Nobel Prize in Physics.

After a year spent in the complementary course of Beaurepaire and a cycle completed at the “nat” of Voiron, he completed his higher studies at the University of Grenoble, where he obtained a master’s degree in physics in 1967. He then worked on the study of variation of frequency of the triggered ruby ​​lasers, and obtained in 1970, at the Pierre-et-Marie-Curie University, a post-graduate doctorate in the specialty “in-depth optics”.

Gérard Albert Mourou is a member of the High College of the École polytechnique and professor emeritus of the University of Michigan, he has won prestigious international awards such as the RW Wood Prize, the Charles H. Townes Prize or the Arthur L. Schawlow in laser science. He was also elevated to the rank of Officer of the Legion of Honor.

The conference took place in the presence of some general directors and directors of higher education and scientific research and of the Ministry of National Defense, lecturers-researchers and about 400 senior engineers.

His amazing words about lasers and their use to enhance the human experience sounded like something out of a science fiction movie. He and his colleague Donna Strickland, a feminist icon to be admired and the third Nobel Prize winner in more than a century, won their Nobel Prize for inventing pulsed amplification, a technique that made Light synonymous with Hope. .

The great thing about this research is that these lasers look like the death rays we grew up with in cartoons and science fiction movies, but they’re actually just the opposite. These lasers have amazing implementations in medicine and could be a very useful tool in ophthalmology and could be the solution to the disease that has affected us the most, cancer.

It is safe to speak for all engineers when we say we are grateful that this genius has taken the trouble to honor us with his presence and expand our knowledge of an area vital to Mother Earth’s well-being. 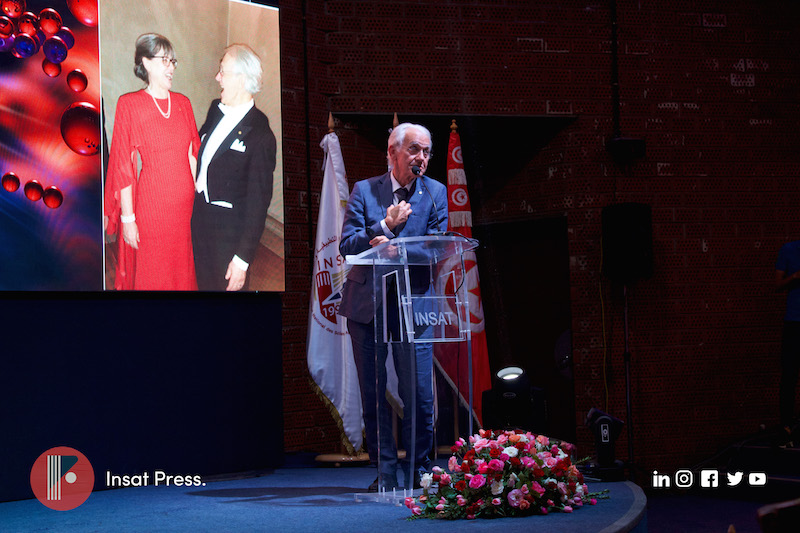 INSAT: School of engineering of reference and of international fame

The National Institute of Applied Sciences and Technologies (INSAT) is an internationally renowned engineering school of reference. Under the supervision of the Ministry of Higher Education and Scientific Research (MESRS) and the University of Carthage.

The creation of INSAT as a public institute of scientific and technological nature (EPST) since its creation in 1992 has responded to Tunisia’s desire to acquire an essential tool for its economic and social development.

The INSAT project was launched in 1989. It benefited from the mobilization of the most important French aid in Tunisia in a single file, about 60 million dinars, of which 32 million for the civil engineering part and 28 million dinars for equipment and laboratory materials.

INSAT adheres to the conservation of national biodiversity in order to preserve the INSAT olive conservatory consisting of 600 olive trees of which 32 are Mediterranean varieties.

This year INSAT celebrates its 26th anniversary, 8500 engineers have graduated in engineering in 6 specialties, 60% of them in international institutions.

The new INSAT context is characterized by new emerging challenges, in particular, the recognition of diplomas, the ranking of universities, the adaptation of study programs to the real needs of the socio-economic environment without forgetting the new needs in terms of sustainable development (Environmental, Economic and Social).

INSAT management is currently opting for the establishment of a quality management system which begins with the administration’s certification according to ISO9001. The Audit scheduled for December 2022, the certification of education and training (According to ISO 21001) and the accreditation for the Software Engineering training cycle in order to obtain the ABET mark. This system is aimed at meeting requirements, student satisfaction and continuous improvement.

The place of scientific research occupies a priority in the missions of the INSAT teacher-researcher. Eight research facilities are operational in multidisciplinary fields.

INSAT has had the opportunity to invite three Nobel laureates since its creation:

INSAT has just obtained the agreement for the maintenance of its building:

– A regional project of 4.57 million dinars granted in 2021 for maintenance and maintenance of buildings.

– A TEEP project accepted by the National Energy Conservation Agency (ANME) for the installation of a photovoltaic field at INSAT.

– A budget of 800 thousand dinars for urgent maintenance work granted by the University of Carthage.

– The restructuring of 9 amphitheaters under partnership agreements with the private sector for a value of approximately 400,000 dinars.

These projects are in the start-up phase.

– The University of Toulouse 3, France

– 2nd world prize in the competition for the KIBO RPC program in Japan.

– A good ranking at the EUROBOT 2022 event in France

– Qualification to the CTF CodeGate Final in South Korea

– 2nd place in the Mena Region at the CSAM CTF 2022 international cybersecurity competition.