Illustration of the famous ” at the same time ” : while the net balance of our financial relations with the EU falls to -10 billion euros a year, our trade balance continues to deteriorate due to a too strong euro and the inability to exploit the opportunities of economic warfare organized by the EU to preside over rivalries within itself, through standards and subsidies that we are less and less able to influence to promote our economic interests in other European countries. We can no longer let the European internal market destroy our economy through German exports and Dutch imports from Asia consolidated by European law and funding.

Indeed, France is the only net contributor to experience an abysmal trade deficit within the single market and the only one that does not compensate for this deficit with surpluses outside the EU. Worse still, this trade deficit is increasing year by year and the only major partner with which its trade balance was structurally in surplus was… the UK. 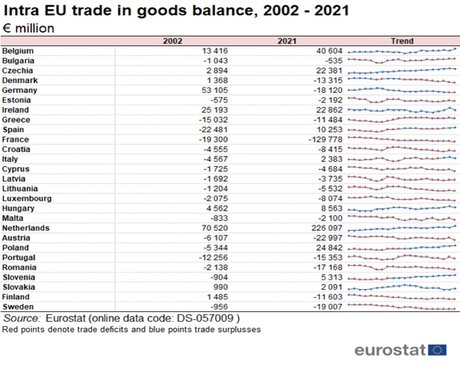 According to customs data, France’s trade deficit in 2021 compared to its main European partners is as follows: Germany (-13 billion euros), Italy (-7 billion), Belgium (-8.5 billion), Spain (- 6 billion), the Netherlands (-9 billion). In total, France’s trade deficit with the EU-27 is exactly a – 56.7 billion euros, increasing by more than 10 billion in one year. Compared to Eurostat data, this figure makes the report of exchanges with Belgium and above all with the Netherlands more accurate, through which most of our imports of goods and energy transit with Asia (including the Persian Gulf). It is nonetheless significant and disturbing.

Graph showing the evolution of trade with France’s main European partners between 2019 and 2021 (Billions of euros, source: Customs) 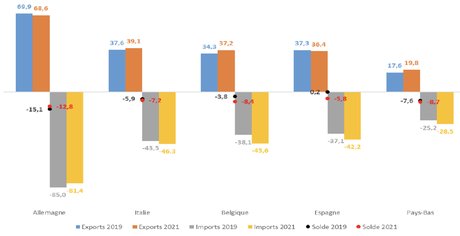 What influence does France have in the EU?

With an abysmal intra-EU trade deficit (multiplied by 7 over 20 years) and a net balance of 10 billion (multiplied by 4 over 20 years as a share of GNI) between rising contributions and falling returns, isn’t it? Is it time to question the French influence policy within the EU?

Indeed, our influence in Europe has diminished only in proportion to our deficits, even though our creditor position has given us leverage no one had thought of using for twenty years. Isn’t it time for a change, if only to preserve harmonious development within the EU?

Since our partners are satisfied with the situation, and the cause of our failures can only be attributed to ourselves, it goes without saying that the initiative can only come from us and from a proactive policy that breaks with the currently dominant culture of resignation in Paris, even if that means imposing a fait accompli on our partners if negotiations lead nowhere, as has been the case for 20 years. We no longer have much to lose and more financial and legal leeway to gain, especially for the financing of defense investments.

Read or re-read the first two parts of this March study:

What does France benefit from in return for its generosity towards the European Union?

The Mars group, made up of about thirty French personalities from various backgrounds, from the public and private sectors and from the academic world, is mobilizing to produce analyzes relating to issues concerning strategic interests relating to defense and security and to the technological and industrial sector, choices which are the basis of French sovereignty.