With its 303 members, the Vélo club d’Annecy is a leading cycling club. We met its president Patrick Bernard.

The Vélo club d’Annecy was created in 1888 by fans of the “little queen”. It still brings together today many members who want to share the practice of their favorite sport. With its 300 licensees, the club is second nationally in terms of licensees. Despite its great age, the club remains one of the most dynamic. For example, forty-five new members joined the club at the start of the season.

The other notable point is its feminization rate. In fact, the club has 35% women in its platoons. For example, it is twice the national average. Another example, the inclusion of sports for the disabled, the section currently has a dozen tandems intended mainly for the blind.

As you can see, the 134-year-old club is going like a youngster. But what is his secret? We interviewed its president to try to reveal the secrets of this winning recipe.

The VCA of Saint-Jorioz.

Interview with Patrick Bernard, president of the Vélo club d’Annecy

What’s your recipe for attracting more licensees? Do you advertise?

Our number of dismissed employees came close to 300, with only a few units, from 2014 to 2020, then dropped sharply with the pandemic linked to Covid, or 270 in 2021 before returning to the previous 303 in 2022. For this, forty -were needed five new entries and among the new twenty-seven he had never had a license from the French Cycling Federation.

We do not advertise on commercial carriers but do have a well documented website and Facebook page which broadcasts club news. But I think the best publicity is “word of mouth” and the attentive welcome given to new subscribers.

The Vélo club d’Annecy offers four days a week five different outings for groups of levels, allowing everyone to integrate into the group that best suits their current shape.

Finally, the population of Annecy is growing every year and we are frequently contacted by young retirees who settle in the region and wish to join a cycling club; we let them test the club before they join or not.

There are much more women at your place than in all other clubs. How do you explain it?

It has been a constant for many, many years that is difficult to explain. The objective element concerns the presence of many couples within the club. The organization of club outings into five groups of levels is certainly an element that facilitates the integration of women who are also present in all groups. Each year, the club organizes stays in France or abroad which promote general cohesion and the development of friendly ties.

Proudly announce from the first page of your site that the creation of the club dates back to 1888. Do you have archives of this creation? Do you think that explains your place as national number 2?

The Vélo club d’Annecy is the second sports club in the city and the oldest. It is therefore well known locally, but I don’t think that explains our national position. Our historical archives have been transferred to the departmental archives. By way of example, I am attaching the text of a document we published on the occasion of the 125th anniversary of the club; includes several reproductions of old documents.

Is the disabled section also very active with around ten tandems? What does the presence of disabled cyclists mean to you? Have people been specially trained to supervise these disabled people?

This section welcomes the blind and was created in 2008 to allow one of the members, victim of an accident, to continue cycling; the latter regained his sight but the section was created and every year we are approached by an increasing number of blind people. They are eleven licensees in 2022 and we have nine drivers all trained internally by Section Chief Alain Lecharpentier. 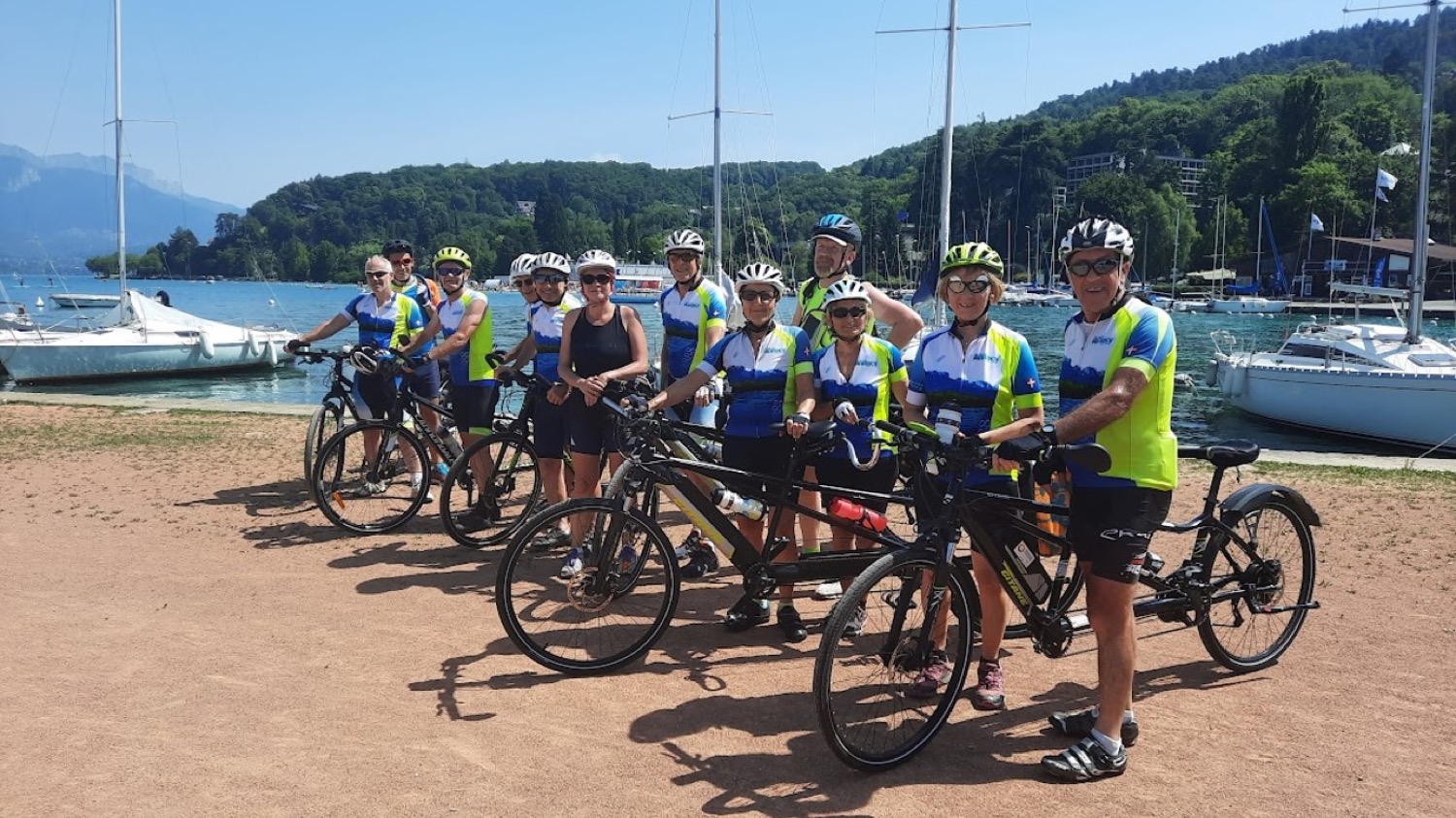 The disabled section of the VCA.

The activity of the section is extremely enriching on a human level both for the blind who appreciate being able to play sports “like everyone else” and for the pilots who are sometimes the only link for these disabled people. We make an effort to fully integrate them into the club’s activities (weekly outings and stays).

On the other hand, she does not have a cycling school for young people. Is it a choice or a lack of supervisors?

In fact, we haven’t had a cycling school for about twenty years after the superintendent’s termination; the request at the time concerned above all the mountain bike, never practiced within our club.