Ha Hong, president of the Vietnam Science and Technology Journalists’ Club, at the ceremony to announce the top 10 science and technology events of 2022. Photo: VNA

This is the 17th year that this activity has been organized by the Science and Technology Journalists Club of Vietnam.

Ha Hong, president of the Vietnam Science and Technology Journalists Club, said that scientific and technological research and innovation activities have achieved many positive results, contributing to the recovery and growth of the country.

1. Promulgation of the Strategy for the development of science, technology and innovation to 2030

On 11 May 2022, the President of the Council of Ministers promulgated the Strategy for the development of science, technology and innovation to 2030. The contents of the Strategy are in line with the documents issued by the Party and the State on the guidelines of the economic development, in particular the Resolution of the 13th National Party Congress and the Ten-Year Strategy of Socio-Economic Development 2021-2030.

2. Approval of the law amending and integrating some articles of the Intellectual Property Law

During the June 16, 2022 working session of the 3rd session of the 15th National Assembly, the law amending and supplementing certain articles of the Intellectual Property Law was passed and will enter into force on January 1, 2023.

The National Conference on Vietnamese National, Cultural, Family Value Systems and Human Standards in the New Period was held on November 29 in Hanoi. Organized by the Central Party Outreach and Education Commission, in cooperation with the Ministry of Culture, Sports and Tourism, the Central Theoretical Council and the Vietnam Academy of Social Sciences, the event aims to materialize the resolution of the 13th National Party Congress and the conclusion of Party General Secretary Nguyen Phu Trong at the National Cultural Conference.

Since its discovery in 1987, CRISPR/cas9 technology has been widely applied to many research subjects such as microorganisms, plants, animals and even human cells. This study was published in the journal Scientific Reports in August 2022. Currently, CRISPR/cas9 technology continues to be developed to improve resistance to powdery mildew on soybeans and cucumbers, the nutritional value of tomatoes… 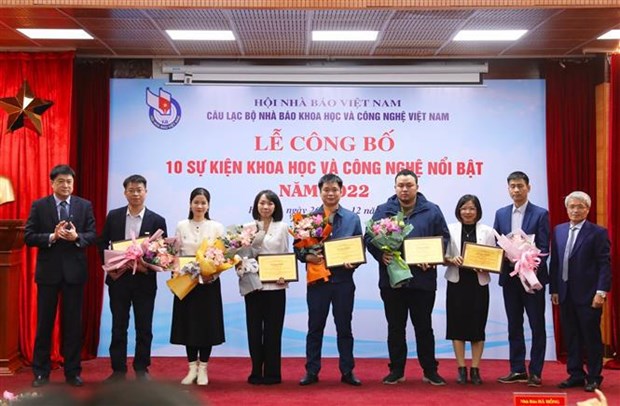 Delivery of certificates for the 10 major science and technology events of 2022. Photo: VNA

6. Successful research and production of the world’s top-ranking clean room

INTECH Group has successfully researched and produced the world’s highest-ranking clean room according to US NEBB standards. A cleanroom is a room or series of rooms in which the concentration of particles is controlled in order to minimize the introduction, generation and retention of particles therein, usually for a specific industrial or scientific research purpose . The realization of the clean room by INTECH group helps to affirm the scientific and technical position of Vietnam in the world.

7. Launched the line of applied chips in medical Internet of Things products.

The IC (IC – Integrated Circuit) chip range launched in September 2022 is the first chip range applied in Internet of Things (IoT) products in the medical field.

9. Presentation of the Ho Chi Minh Prize and the 6th State Science and Technology Prize

The Prizes were awarded to 29 highly applicable research works (12 received the Ho Chi Minh Prize and 17 the State Science and Technology Prize). These works make an important and practical contribution to the work of socio-economic and scientific-technical development, defense and national security of the country.

The second edition of the VinFuture Prize was held on December 20 at the Hanoi Opera House, the VinFuture Grand Prize, worth $3 million, was awarded to five scientists for their breakthrough inventions in network connection technologies, contributing to change the way of communicating and working and laying the foundations for a modern socio-economic development. -VNA